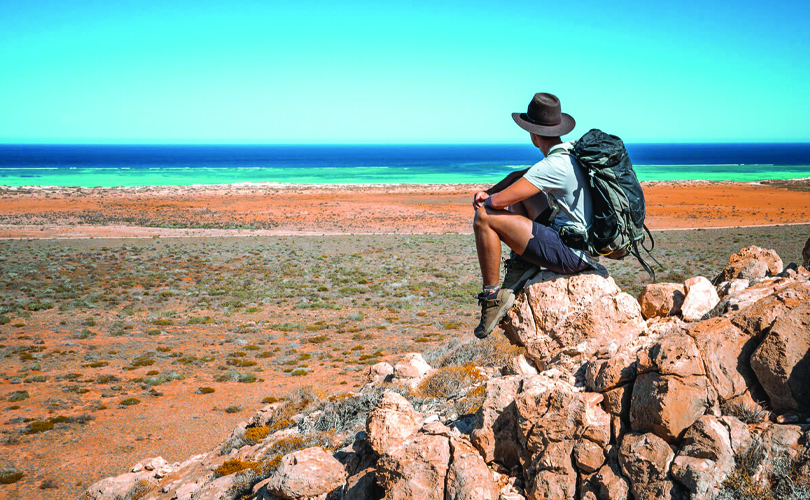 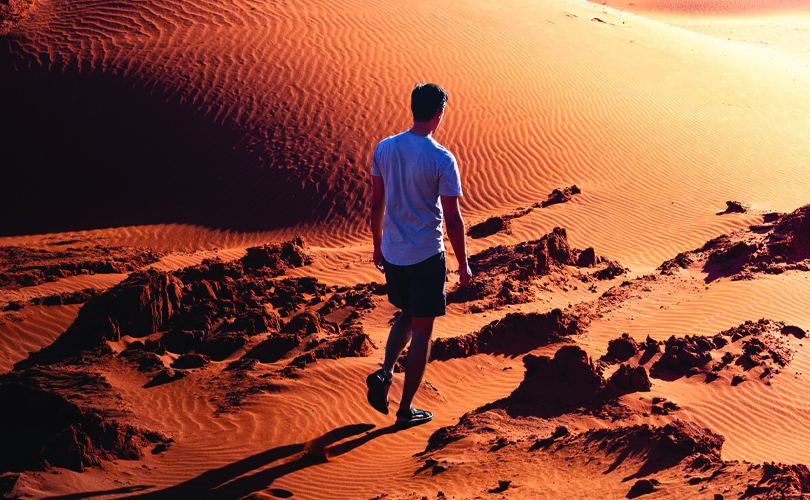 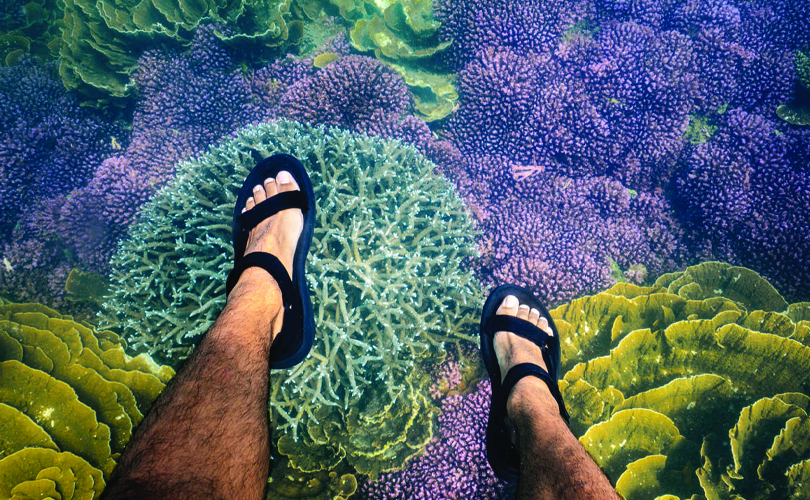 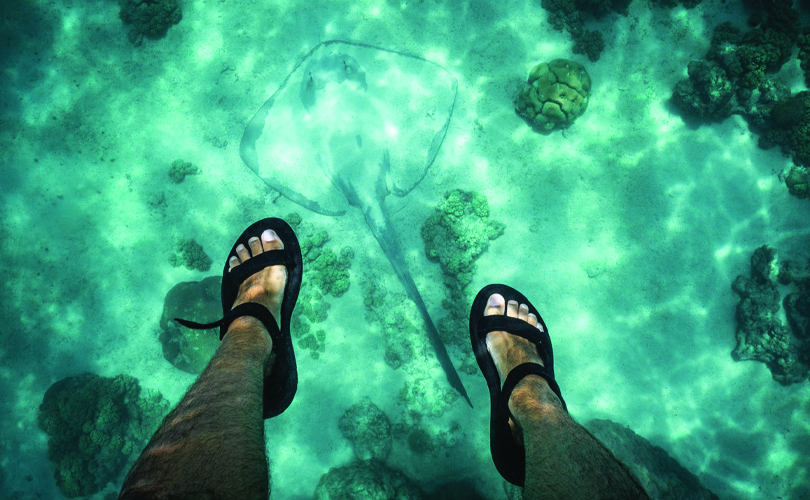 RANGE TO REFF – YOUR ENVIROMENTAL FOOTPRINT

Dreaming of a new adventure? Writer, photographer and environmentalist Joel Johnsson, inspires us by exploring the vibrant Ningaloo Reef in Western Australia - a place where the red dirt meets the reef and the desert meets the dunes.

For a coastline that is home to surf breaks with names like Graveyards and Tombstones, the sea was remarkably calm on the afternoon that thirty tiny turtles made a dash for the water. A small patch of sand no bigger than a beer coaster boiled and frothed, heaving with movement, and from that silky maelstrom struggled a horde of little hatchlings. Blinking in the soft afternoon glow as they emerged from that sandy womb, they didn’t even pause before setting off towards the low horizon - a constellation of twinkling, wriggling little stars tumbling towards the water. But we’ve skipped ahead. Our story ends here, at the end of the day, with a little turtle, and an uncertain future. But it starts with a sunrise, high up on the range.

The range is the best place to see the reef. High up on that bulging spine of rock that towers over the coastline like a grandstand, if you squint at the horizon, you start to see very strange things in the sky. Cup your hands over your eyes. See it? Those two hazy smudges of colour that hang in the air? The orange smudge that billows above the parched land, that’s the western edge of the Aussie outback – all its red dirt, desert sands, rust-tinged rocks and rich ochre – throwing its colour and light up into sky. And next to it, that bright, shimmering turquoise gleam that fades off into the endless blue of the open sky? That’s the Ningaloo Reef, a vibrant ribbon of coral lagoon hugging the coastline for hundreds of kilometres, beaming out its radiant sheen like a beacon in the noon-day sun. Tropical North Queensland markets itself as the place where the rainforest meets the reef; Ningaloo is the place where the red dirt meets the reef, where the desert meets the dunes, and the colours are so vivid that they’re reflected in the sky.

The shimmering water beckons us from far below and we descend. Down through the desiccated canyons that twist their way through the range, archaic memories of watercourses that now only run once every few years. The rocks are twisted and strange – they are the fossilised remains of ancient reefs. Over 34,000 years ago, the ancestors of the traditional custodians of this land – the Baiyungu, Thalanyji and Yinikurtura people – might have stood in the same place, and the water may have lapped at their feet. Once great cities of coral, only rock remains, studded here and there with the fossilised teeth of megalodon sharks.

Down further still, at the bottom of a narrow canyon, freshwater runs out of the underground cave systems that honeycomb the range. Drifting silently on paddleboards and kayaks, we watch the timid black-flanked rock wallabies that peer from shadowed overhangs along the canyon rim. A quietness pervades, a reverence. Towering cliffs layered of ochre and umber speak of the deep time, the arcane and eternal whisper of a history laid bare on a rich tapestry of rock. It feels strange that humans are a part of this ageless story. But increasingly, we are making our mark, and laying down our own undying history. In place of sediment and sand, plastic and chemicals settle on the fresh page, an inorganic testament to industrialisation – nearly every particle of plastic ever created still exists in some form; buried underground, fragmented within our oceans or dissolved into chemical traces within our bodies. As future humans leaf through the pages of time, writ large in the twisted layers of rock in canyons like these, a thin layer of plastic will mark our arrival on a history that stretches back millennia.

As the canyon ends, we emerge into bright sunlight. In the distance, the living coral glitters in the sunlight, existing as it has for thousands of years, built on the bedrock of eons. Red sand gives way to white coastal dunes and finally, the cool azure water. The continental shelf is narrower here than in any other part of the continent, and standing on the shoreline, it feels like the whole ocean rises up to meet you. Each year, huge migrations of whale sharks and humpback whales visit the area to feed and rest in the calm waters, and it’s one of the only places in Australia (and one of the few places in the world) that you can swim with these giants. Ningaloo is the longest fringing coral reef in the world – that means when you step off the sand and into the cool water, you’re snorkelling over coral. Swallowtail dart and Convict Tangs swirl around our feet, skittering away like leaves in the autumn breeze when a Cowtail Ray swoops past. Manta rays, dugongs, sharks and dolphins are also common sights, along with three species of turtles. The afternoon is spent drifting over a kaleidoscope of colour, with the clicks and pops of the bustling underwater metropolis echoing in our ears.

In the dying light of the afternoon, with wrinkled fingers and salt-flecked hair, we sit on the beach and watch the hatchlings emerge into the world, scrambling down the same beach that their ancestors have for thousands of years before them. They face a perilous journey – just 1 in 1000 hatchlings will survive to adulthood to return and nest on the beaches at Ningaloo. Upon emerging from their nests, they face a gauntlet of birds, crabs, goannas, fish and other predators before making it to the open ocean. If these odds weren’t steep enough, our appetite for plastic is placing further pressures on these tiny creatures. We are producing, and discarding, plastic at a huge rate, dumping around one garbage truck-worth of plastic into the ocean every minute. Turtles get tangled in larger pieces and eat smaller pieces, mistaking them for jellyfish. Up to half of all sea turtles worldwide have ingested plastic, with young turtles much more likely to do so, and just one piece can be enough to kill a turtle. But it doesn’t need to be like this.

There are simple ways for consumers to reduce your use of single-use plastics, which make up almost 95% of the plastic produced in Australia. Teva is one company that is actively committing to reduce their contribution to the plastic tide - 100% of Teva’s iconic straps are now made using recycled straps are now made using recycled plastic which might otherwise end up in the oceans.

CAN YOU HIKE IN SANDALS?
Written by Chaco | Originally appeared here One of the most frequent questions we get asked is: can you hike in sandals? While there is a wide range of advice and discourse out there, the...
NEW TO HIKING, TEN TIPS WITH KEEN
What gear do I need? How much water do I bring? Can I hike in jeans? Getting into hiking can seem overwhelming at first. But just remember — once upon a time, even the most experienced hi...
Shop
Help
About us
Terms of Service
Refund policy
NEED ASSISTANCE?
service@thewalkingcompany.com.au
FOLLOW US